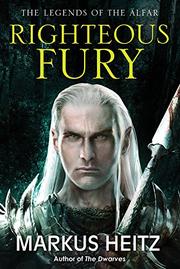 From the author of the best-selling Dwarves series (The Fate of the Dwarves, 2008, etc.), a new venture retelling substantially the same story but from a radically different point of view; it first appeared in Germany in 2009.

The dark elves, or älfar, are renowned for their uncompromising warrior ethos. Their rulers, the Inextinguishables—an incestuous brother-sister couple so overwhelming in aspect that other älfar cannot behold them without going mad—decree that the elves (for whom the älfar bear a particular loathing) shall be destroyed. First, though, they will need to unlock the gates of the impregnable fortress that bars access. So they dispatch warriors Caphalor and Sinthoras to obtain the support of a mist-demon. Caphalor’s Constellations faction believes only in defensive wars, while Sinthoras’ rival Comets thirst for conquest. Sinthoras, a great artist, owns Raleeha, a human who voluntarily gave herself into slavery in order to learn to create great art; as punishment for a minor oversight, Sinthoras blinds her. Caphalor, meanwhile, watches in approval as his daughter lobotomizes a potentially rebellious slave. To reach the mist-demon, they brave many perils, including defeat and humiliation at the hands of the gnomelike fflecx, who are expert poisoners, and the gålran zhadar, whose magic and technology is unsurpassed. After many adventures, they return, their limitless contempt for nonälfar races and boundless arrogance somewhat tempered, with the mist-demon’s agreement—or so they think. This excellent back story, driven by unrelenting action, springs to life through the vivid, vigorous writing and almost despite characters so unpleasant it's difficult to sympathize with them. The intricate älfar artworks, derived mostly from flayed or eviscerated enemies, both intrigue and repel.

Fine for fans of the Dwarves series; others may be in for an uncomfortable visit.

Legend of the Blood Raven
by D.C. McLaughlin
Indie

Carnifex
by D.P. Prior
Sci-Fi