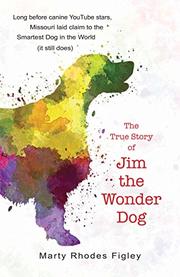 THE TRUE STORY OF JIM THE WONDER DOG

A children’s book presents the true story of a dog with unexplained abilities who delighted audiences in the 1930s.

In this work, Figley (Santa’s Underwear, 2016, etc.) introduces the Llewellin setter known as Jim the Wonder Dog, in honor of his phenomenal ability to understand and answer questions. The author follows Jim from puppyhood—he was a runt left with Missouri hotel owner Sam VanArsdale, who first valued his surprising skill at bird hunting—to the monument that still stands at his grave. Although he helped VanArsdale flush out thousands of birds, Jim’s defining talent was his ability to answer questions with a degree of comprehension few would expect in a dog, identifying trees by species, pointing out a guest staying in a particular room, and indicating which man in a group had the most money in his pocket. Jim’s abilities brought him local fame, though VanArsdale turned down both Hollywood endorsements and attempts to profit on Jim’s ability to pick winners at the racetrack. Although the book addresses the skepticism that some contemporaries expressed, Figley has chosen to take the stories of Jim, drawn largely from a locally produced documentary, at face value. An author’s note explores the value of such oral histories as primary sources and provides guidance for young readers on evaluating the material. The account avoids speculating about the causes of Jim’s talents, and while readers may wish for a tidy explanation, that decision ensures the narrative follows the historical record. Figley’s prose is matter-of-fact (“They hunted all day. Jim performed like a bird-dog genius over and over again”), and the story moves at an appropriate pace, keeping readers engaged without adding artificial tension to a simple plot. The work does an excellent job of drawing attention to a little-known piece of history without overstating its importance, giving Jim credit for intriguing and amusing many observers during a difficult time without claiming he changed the world.

An engaging slice of history that should appeal to young canine enthusiasts while demonstrating the solid use of primary sources.

BALTO AND THE GREAT RACE
by Elizabeth Cody Kimmel
Nonfiction