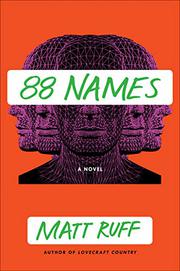 An extreme gamer who has concocted a scheme to monetize his expertise gets into trouble navigating a virtual world that starts to intrude on his real life.

Following in the footsteps of Ernie Cline, who hit the geek gold mine with Ready Player One (2011), Ruff (Lovecraft Country, 2016, etc.) takes his shot at a near-future gaming world that’s more grounded than most virtual-reality universes but also more complex. Our main protagonist is John Chu, the founder of Sherpa, Inc., a consulting firm that guides new gamers through a variety of mostly VR–based video games. He has good partners in Jolene, a more mature African American gamer who won’t take any of his shit, and Anja, a brilliant young player whose permanent injury has left her on life support, albeit with thought-controlled access to the VR world. Unfortunately, he also has a nemesis in Darla Jean Covington, his virtual ex-girlfriend, who is clearly holding a grudge. The kicker comes when Chu is approached by a man named Smith on behalf of a pseudonymous client named Mr. Jones, who wishes to pay him an astonishing $100,000 per week for his exclusive services. Lurking in the background is Ms. Pang, an enigmatic Chinese woman who might be a spy. Soon Chu begins to suspect that his mysterious client is actually North Korean Supreme Leader Kim Jong-un. Fortunately, Chu has some backup from his mother, who’s a member of a secretive anti-terrorist task force called Zero Day, and an absent father who pulls his weight when he needs to. It’s a pretty good thriller, but it’s also very much a book for gamers by gamers. If acronyms like MMORPG, PvP, or PPML throw you for a loop, this might not be the ride for you. Gamers for life who can pry themselves off the controller will certainly dig this digital-era whodunit.

Good characters, keen social commentary, and propulsive action sequences with a bit too much tech jargon.

THE MIRAGE
by Matt Ruff
Fiction

SET THIS HOUSE IN ORDER
by Matt Ruff
Fiction