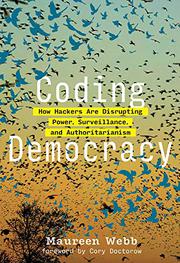 Facebook and Amazon may be in the business of selling us to the highest bidder, but not without good guys fighting to keep the internet free and safe.

Webb, a Vancouver-based labor attorney and activist, once hoped that democratic constitutions around the world would roll back the wave of governmental and corporate intrusions on privacy. Unfortunately, “when you take stock of the pervasive illegality states and corporations are engaged in with their uses of digital tech, it is manifest that the law is collapsing.” Leave it, then, to the white-hat hackers of the world to deliver us from technological evil. The author traces the hacker ethic to MIT programmers in the late 1950s who stole mainframe time when the authorities weren’t looking, then to the Bay Area libertarians who would launch the computing revolution. Valuably, Webb ranges far beyond that American-centric story—even as, she notes, most internet traffic passes through and most of the internet’s backbone resides in the U.S.—to examine the long history of hacking in Europe, courtesy especially of the Berlin-born Chaos Computer Club and a tech culture “aligned more with the advent of personal computing than with the development of early mainframe computing.” The CCC gave rise to other hacking movements, such as the Spanish ensemble of coders who linked the financial collapse of 2008 as it played out in their country with misdoings on the parts of bankers and government officials, and the Five Star Movement in Italy, with its hearty mistrust of the status quo. While making allowances for black-hatters such as Julian Assange, Webb asserts that the goal of hackers and “hacktivists” is profoundly on the side of ordinary people. “The goal they share,” she writes, “is to distribute power to the people, to put the people’s hands on matters as local, national, and global citizens.” And the overarching task, she concludes, is no less daunting—namely, to “build a new condition of freedom.”

Coders seeking to do good in the world will find much inspiration here.