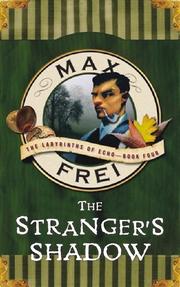 Frei, the alter-ego creation of Russian writer Svetlana Martynchik, returns with a saving-the-otherworld tale that doesn’t yield any surprises but that suitably closes the Labyrinths of Echo series.

Frei, of course, is the hero as well as the pseudonymous author. He’s a creature of habits, most of them bad. He frets. He kvetches. Yet he rises to occasions, even if he grumbles about that, too, and he puts up with every bit of weirdness the world-that-isn’t-quite-his-own throws at him—even when it takes him into the underworld, or the alterworld, or anyway, some different address from the strange one he’s just gotten used to, populated by characters such as Gen. Boboota Box and Sir Juffin Hully. Having risen to a position of authority within the Minor Secret Investigative Force of the City of Echo, paired up with dudes such as the Master Eavesdropper (oh so timely, given the ways of the NSA and the GRU), Max is now called on to determine why figures out of the shadow world are creeping up on good citizens and relieving them of existence. The storyline isn’t much more complicated than an hourlong episode of Doctor Who—shadows in libraries, anyone?—but Frei the author has good fun putting Frei the character into impossible situations, winding the players up and watching them go. Suffice it to say that elves figure into the equation, and vorpal blades, and huzzahs from the people, and all to one glorious end. Or, as Max says: “Never in my life had I imagined I would have to save so many people in such an absurd manner.”

Running out of steam, yes. But still good entertainment for those who’ve already entered Max’s beguiling world and lived to tell the tale.

THE STRANGER
by Max Frei

THE MAP OF TIME
by Félix J. Palma
Fiction

RUMO AND HIS MIRACULOUS ADVENTURES
by Walter Moers
Fiction

A GAME OF THRONES
by George R.R. Martin
Newsletter sign-up