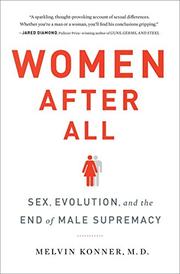 Konner (Neuroscience and Behavioral Biology/Emory Univ.; The Evolution of Childhood: Relationships, Emotion, Mind, 2010, etc.) examines why he believes women are superior to men “in most ways that will matter in the future.”

Contemporary discussions regarding gender typically revolve around the idea that the masculine and feminine are more products of culture than of nature. The author counters prevailing ideas about gender by taking a biologically essentialist position and arguing that differences between men and women arise “because of intrinsic differences in the body and the brain.” Drawing from a variety of disciplines, including anthropology, biology, sociology, psychology and history, Konner suggests that women are not only more logical and practical, but also more cooperative and caring than men. They are “builders rather than destroyers.” Males, on the other hand, suffer from what he calls “androgen poisoning,” a “disorder” that causes everything from higher overall mortality rates to premature baldness. The only real reason men exist is because they provide the evolutionary variety that allows the human species to withstand disease. Citing the work of numerous anthropologists, Konner suggests that the “problem” of male dominance—which was built primarily on the greater physical strength with which men are endowed—seems to have been present from the start. Yet in early nomadic hunter-gatherer societies, there was “less gender asymmetry in power.” In the stable farming cultures that followed, women became more easily subject to all-male power coalitions, which led to centuries of social, economic and political subjugation. However, the rise of female power coalitions in recent centuries has earned modern women greater respect and status in society. Moreover, technological developments have rendered the brawn that was once so crucial to male dominance practically obsolete. Equality between the sexes, though not yet a reality, is now within reach—and, according to Konner, is the thing that may save humanity from destroying itself and the planet.

Insightful and bound to spark controversy.

MEDICINE AT THE CROSSROADS
by Melvin Konner

EVOLUTION AND THE FUTURE OF MANKIND
by Lawrence Wood
Nonfiction

...IF THEY REALLY LOVED US.
by D.J. Parsons
Nonfiction

THE EDGE OF EVOLUTION
by Michael J. Behe
Newsletter sign-up