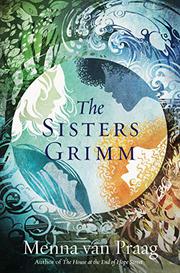 On their shared 18th birthday, four half sisters, who’ve only met in a dream world, must fight to the death to appease their demonic father, the nefarious Wilhelm Grimm.

Cambridge residents Goldie, Scarlet, Bea, and Liyana don’t remember meeting each other in their childhood dreams of visiting Everwhere. They don’t remember the immense powers they possessed there—powers of earth, air, water, and fire. Indeed, they have no idea they have sisters or who their father really is. But as their 18th birthday fast approaches, their powers begin to manifest in the real world. Their father’s soldiers, fallen stars disguised as men forever destined to hunt “Grimm Girls,” soon close in on their quarries. Only Leo, who inexplicably finds himself falling for Goldie, questions the point of this battle between good and evil and if he can bring himself to kill Goldie, thereby sacrificing himself. As each girl is drawn to one another, to their hunters, and to Everwhere, they must choose a path of light or darkness. The winner of the battle, as far as Grimm is concerned, will help him shape the dark fate of the mortal world. This tale is van Praag’s (The Dress Shop of Dreams, 2014, etc.) first attempt at a fantasy epic and, unlike her previous work, suffers from a muddled premise, vague stakes that don’t become clear until halfway through the book, and narration-induced whiplash. She jumps too quickly between several out-of-sequence chronologies and many different characters’ points of view. Meanwhile, the reader can't be sure who is actually telling this story—Goldie, who narrates some sections in first person, an omniscient narrator who sometimes talks to “you,” or whomever is telling the other characters’ sections from a third-person-limited perspective. On worldbuilding alone, van Praag’s atmospheric prose, intriguing premise, and diverse cast of characters receive high marks, but fantasy isn’t just about worldbuilding. There simply isn’t enough time spent with each character for readers to connect with them. Being cagey about key story elements does this plot a disservice as well. And while it’s admirable that van Praag tackles themes of surviving child abuse, violence, and sexual assault, along with caring for grandparents and parents with mental illnesses, they sadly often get lost in the meandering narrative.

This is a fantasy premise with great potential, but too much experimentation doesn’t allow it to thrive.

THE DRESS SHOP OF DREAMS
by Menna van Praag
Fiction