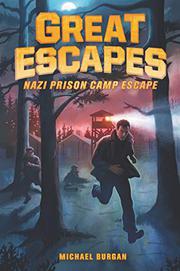 The tale of a real-life pilot’s many attempts to escape from German prisoner-of-war camps in World War II.

Bill Ash, a poor, white Texas man, is so eager to fight Nazis that he can’t wait for America. Instead, more than a year before the United States joins the war, Bill goes to Canada and enlists in the Royal Air Force. He loves being a Spitfire pilot, but he’s soon shot down in France and, after some time in hiding, is sent to Stalag Luft III, a POW camp. Protected by the Geneva Conventions, the POWs are treated much better than Nazi prisoners in concentration camps or death camps (explained in one of several historical sidebars). That doesn’t mean Bill is content to stay safely imprisoned, however. Desperate to get back to the fighting, he unsuccessfully attempts to escape from imprisonment time and time again even as the Nazis punish him with time in “the cooler.” Some of his attempts are merely opportunistic, such as dashing from a work detail for freedom. Others are elaborate, such as a pleasantly gross tale of digging a tunnel underneath the latrines, complete with ingenious contraptions jury-rigged from Red Cross relief parcels. With the POWs’ (historically accurate) insulation from the war’s atrocities, this becomes a mostly low-stakes, exciting tale of wartime derring-do. Invented dialogue tips this story over into fiction.