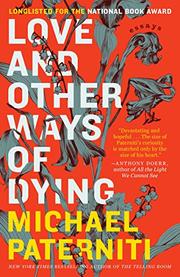 LOVE AND OTHER WAYS OF DYING

A collection of long-form nonfiction from GQ and New York Times Magazine contributor Paterniti (The Telling Room: A Tale of Love, Betrayal, Revenge, and the World's Greatest Piece of Cheese, 2013, etc.).

The Telling Room was one of the most critically acclaimed books of 2013, and this carefully curated selection of features demonstrates the breadth of the author’s peculiar, personal style of storytelling. There are familiar pieces—Paterniti’s account of ferrying Einstein’s brain around the country is front and center, as is “The Fifteen-Year Layover,” which recounts the long exile of the refugee who spent 15 years at Charles de Gaulle Airport. Others are lovingly crafted portraits of interesting people like “The Giant,” whom Paterniti sought out in Ukraine after reading reports of a man well over 8 feet tall. The author has spent a considerable amount of time overseas, and he recounts his trip to China to meet the man credited with stopping hundreds of suicides on a bridge over the Yangtze River, as well as his journey in Japan following the 2011 tsunami. However, Paterniti is not limited to merely capturing great stories. Another pair of articles deliciously describes food and the people who craft it into wonderful things: the author’s portrait of Spanish chef Ferran Adriá and a similarly mouthwatering feature, “The Last Meal,” in which the author re-creates the final orgiastic meal of French President François Mitterrand. This is journalism unlike the standard fare found in newspapers and tabloid magazines and a tribute to the durability of the human spirit. In a lovely but spare introduction, the author summarizes the process of creating this collection: “If The Game was fantasy and The Work has been cold reality, in both cases they’ve come to represent, at least for me, the same underlying need to make sense of the way that love and loss, justice and devastation, and beauty and pain can fuse to make some bearable, or at least fathomable, whole.”

Real-world storytelling of the highest order.

H IS FOR HAWK
by Helen Macdonald
Nonfiction

THE OPERATORS
by Michael Hastings
Nonfiction