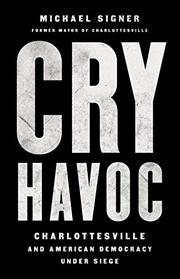 An insider’s account of the “madness and mayhem” of the deadly white nationalist rally in Charlottesville, Virginia, in August 2017 and the nightmare confrontation between free speech and public safety that the clash created.

Signer (Becoming Madison: The Extraordinary Origins of the Least Likely Founding Father, 2015, etc.) was mayor of the progressive college town when hundreds of armed, torch-carrying protesters arrived, shouting “Jews will not replace us,” ostensibly to protect a statue of Robert E. Lee from removal. Although he lacked power in his ceremonial position (the city manager was in charge), Signer felt compelled to act: He was Jewish, an expert on demagoguery, and teaching a university course on race, policy and history. With a doctorate in political science, the author was committed to deliberative government. In this deeply introspective book, which addresses Donald Trump’s fearmongering rise to the presidency, Signer explains how he was “pushing the boundaries” of his job, encouraging different perspectives on the statue issue and upsetting many staff with his seeming meddling. Some citizens insisted on removing the Confederate monument; others, on keeping it as a “teachable moment.” Opposing “symbolic politics,” the author hoped to “recontextualize” the statue, using public space to tell the full story of race. With the “Unite the Right” rally imminent, Signer began seeking a “silver bullet” to avert violence between opposing protesters, enlisting advice and assistance from experts. His frustration at not being able to shape the outcome is palpable. “I could have left more up to others,” he writes. He offers a thorough analysis of the “shortcomings” of First Amendment law and the failures of policing. Berating himself as sometimes “impetuous,” he emerges as a well-intentioned, proactive figurehead who suffered undeserved attacks on social media. Signer refuses to scapegoat, but it is noteworthy that most of those in power at the time are now gone.

A complex, disturbing, valuable tale of racial disharmony, government failure, and one man’s frantic attempts to save the day.