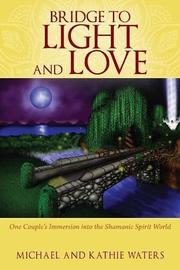 BRIDGE TO LIGHT AND LOVE

A couple find an important role to play as a bridge between this world and the spirit realm.

After moving into a house built on an ancient Native American burial ground, debut authors Michael and Kathie Waters began to notice an unusual aura on their land. What was originally just a feeling soon transformed into visitations of Native American spirits, and these encounters quickly became more frequent and striking. It was soon revealed to Kathie that her duty was to help spirits cross into the light, meaning people who had died but not yet moved on. Kathie and Mike (who also experienced these spiritual manifestations) embraced this new charge and spent much time and energy, at home and elsewhere, conversing with spirits that appeared to them, fighting off dark forces (often with the help of spirits and animal guardians), studying shamanism, and helping souls cross into the light. During one episode, “Mike and I held hands and using the collective love in our hearts, we let the love flow. The light opened above the water and a flood of it came forth. I could see the spirits of men, women, and children running into it.” Eventually, the couple learned that the spirits had one more vital task for them: writing this book. The fact that the authors originally recorded these experiences in personal journals allows them to write with astounding detail, transporting readers into the story and making pages easy to turn. The book’s content is no doubt peculiar and to many unbelievable, but the couple exudes such great confidence that even skeptics might scratch their heads a little. Plot momentum seems to be rooted solely in the intensifying of the authors’ spiritual encounters, and this energy tapers off about halfway through the work as their experiences become more predictable and redundant. But the final pages include important conclusions drawn from the couple’s enlightenment, including: “If we could get back what our ancestors knew, we could heal our suffering world.”