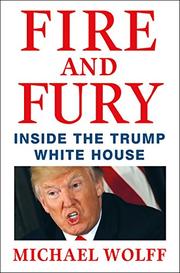 Headline-grabbing fly-on-the-wall view of the dysfunctional playroom that is the Trump White House.

“What is this ‘white trash’?” asks a fashion model of Donald Trump. He replies, “They’re people just like me, only they’re poor.” There’s a certain Snopes-comes-to-the-big-city feel to celebrity journalist Wolff’s (Television Is the New Television: The Unexpected Triumph of Old Media in the Digital Age, 2015, etc.) tawdry portrait of the current occupants of the White House, which, writes the author, is based on conversations with the president and his senior staff and backed by hundreds of hours of recordings. Given the many competing fiefdoms in the West Wing, Wolff adds, no one wholly endorsed his access (“the president himself encouraged this idea,” he says), but no one quite said no, either. The results are damning, those competing fiefdoms not just jealous of their turf, but also vicious in their characterizations of the other side. Most aggressively nasty, by the author’s account, is former assistant Steve Bannon, who describes Trump as “a simple machine” with a binary of flattery and calumny, while he declares that “I am the leader of the national-populist movement” and suggests that Trumpism can do fine without its namesake—who, he adds, will not be around for a second term. Wolff has plenty of sting himself. Of one-time intern-turned–power broker Stephen Miller, he sneers, “he was supposed to be the house intellectual but was militantly unread,” while he suggests that the dumb-as-a-brick (Bannon’s characterization) Ivanka’s relationship with her father is purely transactional: “It was business. Building the brand, the presidential campaign, and now the White House—it was all business.” No one in the administration seems up to the job he or she is supposed to be doing, and there’s an ugly, startling instance of incompetence on every page.

The White House has naturally denied and decried Wolff’s account, but even if it’s only halfway accurate, it presents an appalling view of a frighteningly unqualified and unprepared gang that can’t think straight.

AUTUMN OF THE MOGULS
by Michael Wolff
Nonfiction

IT'S EVEN WORSE THAN YOU THINK
by David Cay Johnston
Nonfiction