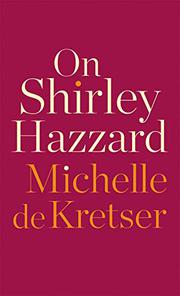 De Kretser (The Life To Come, 2017, etc.), who moved to Australia with her family in 1972, fell in love with the novels of Shirley Hazzard (1931-2016) because they “spoke of places from which I had come and places to which I longed to go.” They also offered a view of Australia that was cleareyed about such problems as sexism and racial prejudice, which helped the author come to terms with living as an Asian woman in a white-dominated country. Moreover, Hazzard’s novels revealed a deep engagement with history and especially imperialism, a topic with which de Kretser was intimately acquainted. Hazzard was also a keen craftsperson who “read her work aloud to herself to get the rhythms right” and consciously sought to create high literary art. De Kretser writes that “movement of poetry infiltrates [Hazzard’s] prose,” and she offers examples from various, often unnamed, novels of the “precision, swiftness [and] taste for compassion” with which Hazzard used adjectives, described places and characters, and expressed political views. De Kretser’s book is strongest in its very personal, often moving appreciation for Hazzard’s work. As literary criticism, the narrative is flawed. De Kretser provides only bits and pieces about Hazzard’s life and brief reflections about important novels like The Bay of Noon, which was shortlisted for the Lost Man Booker Prize in 2010, and The Great Fire, which won the 2003 National Book Award. She offers little biographical, historical, critical, social, or political details and no cited references that would help those not already acquainted with Hazzard and/or Australian 20th-century literature more deeply appreciate this important novelist. As a result, the book reads more like a disconnected collection of poignant private musings than a text meant to educate readers who might be interested in exploring Hazzard’s life and work.

An incomplete tribute that may please some Hazzard fans but leave others adrift.

THE LIFE TO COME
by Michelle de Kretser
Fiction