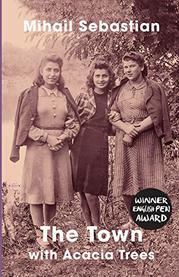 THE TOWN WITH ACACIA TREES

In this novel, a young man and woman fall in and out of love as they come to terms with the banalities of adulthood. As the story opens, it lucidly depicts the bookish, 15-year-old Adriana’s reappraisal of childhood “with the weary eyes of a survivor” and the intensities of first love. Gelu is a 20-year-old university student from Adriana’s unnamed town, and he’s preoccupied with his own romance—but in the course of rescuing a depressed peer from an attic refuge, he and Adriana form a friendship. The author reveals how their bond builds, slowly and subtly, until they find themselves in a passionate tryst. Adriana floats in and out of Bucharest, pursuing her musical talent as a pianist with the help of affluent relatives, and finds herself tangled in the lives of Gelu, whose studies are in the capital, and Cello Viorin, an impetuous and romantic composer. (The sensory experience of music is a repeated focus, in an evident nod to Marcel Proust’s work.) The Bucharest backdrop—the university, the concert hall, the tram, the streetscapes—effectively recalls Sebastian’s other works, but this novel expands on the tension between province and capital, which acts as a stand-in for the conflict between traditional and modern values. Adriana and Gelu, in the midst of a century-defining sea change, discover their need for each other even as they witness a marriage that ends in divorce, due to a previous affair between the wife and a nun, and another matrimony that becomes “something that destroys youth and drains desire.” Reigh handily preserves Sebastian’s supple, languid syntax, shaping each sentence to accentuate his exquisite lyricism, as when the couple remains unable to yield entirely to their desire “to be held in such a way that it obliterated everything apart from the ecstasy of the flesh.”

THE STORY THAT CANNOT BE TOLD
by J. Kasper Kramer
Nonfiction

THE HOLOCAUST IN ROMANIA
by Radu Ioanid
Fiction