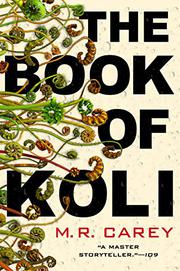 THE BOOK OF KOLI

The first volume in Carey’s Rampart trilogy is set centuries into a future shaped by war and climate change, where the scant remains of humankind are threatened by genetically modified trees and plants.

Teenager Koli Woodsmith lives in Mythen Rood, a village of about 200 people in a place called Ingland, which has other names such as “Briton and Albion and Yewkay.” He was raised to cultivate, and kill, the wood from the dangerous trees beyond Mythen Rood’s protective walls. Mythen Rood is governed by the Ramparts (made up entirely of members of one family—what a coincidence), who protect the village with ancient, solar-powered tech. After the Waiting, a time in which each child, upon turning 15, must decide their future, Koli takes the Rampart test: He must “awaken” a piece of old tech. After he inevitably fails, he steals a music player which houses a charming “manic pixie dream girl” AI named Monono, who reveals a universe of knowledge. Of course, a little bit of knowledge can threaten entire societies or, in Koli’s case, a village held in thrall to a family with unfettered access to powerful weapons. Koli attempts to use the device to become a Rampart, he becomes their greatest threat, and he’s exiled to the world beyond Mythen Rood. Luckily, the pragmatic Koli has his wits, Monono, and an ally in Ursala, a traveling doctor who strives to usher in a healthy new generation of babies before humanity dies out for good. Koli will need all the help he can get, especially when he’s captured by a fearsome group ruled by a mad messianic figure who claims to have psychic abilities. Narrator Koli’s inquisitive mind and kind heart make him the perfect guide to Carey’s (Someone Like Me, 2018, etc.) immersive, impeccably rendered world, and his speech and way of life are different enough to imagine the weight of what was lost but still achingly familiar, and as always, Carey leavens his often bleak scenarios with empathy and hope. Readers will be thrilled to know the next two books will be published in short order.

A captivating start to what promises to be an epic post-apocalyptic fable.

THE BOY ON THE BRIDGE
by M.R. Carey
Fiction

THE GIRL WITH ALL THE GIFTS
by M.R. Carey
Newsletter sign-up