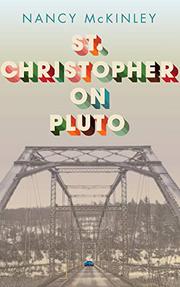 MK and Colleen, former classmates at Our Lady of Perpetual Help Elementary School, reconnect as middle-aged women, both working retail jobs in a mall that’s just months away from closing its doors. From the outside, they seem to live just on the edge of despair and economic ruin, except both have too much moxie. In "St. Christopher on Pluto," for example, Colleen entangles MK in a plot to ditch Colleen's car by the Susquehanna River for insurance money. While MK lectures Colleen on committing fraud, Colleen wisecracks and tells MK to lighten up. That's the setup of many of McKinley's stories: Bighearted, redheaded Colleen has a scheme (or a volunteer gig), and she wheedles practical MK, often the narrator, into coming along. These slice-of-life stories touch upon social issues on the verge of fracturing already economically stressed, conservative communities: immigration, America's never-ending post–9/11 wars, the HIV epidemic, drug addiction, and the disappearance of good blue-collar jobs. In "Complicado," Colleen volunteers to photograph an ESL class graduation, but it turns out the women don't want their pictures taken for fear of becoming the target of a rising tide of jingoism. Once she understands, Colleen yanks the film from her camera, and the party ends with the church organist's offering her accordion to a young Mexican man, "the Latin sounds creat[ing] fusion in a room steeped with polka fests." While we yearn for such happy endings in life, they can seem a bit treacly in fiction. When McKinley resists the lure of “Kumbayah” moments, she delivers emotionally devastating stories about how places with bleak economic futures hurt good, ordinary people—as well as how such people quietly craft lives full of intangible bounty.