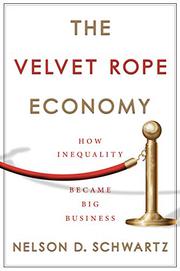 New York Times reporter Schwartz uses what he has learned covering business and economics to present an intriguing examination of income inequality.

The velvet rope metaphor will be familiar to any reader who has felt the sting of waiting in line while more privileged individuals gain entrance to a theater or night club or amusement park ride. “The rise of the Velvet Rope Economy,” writes the author, “threatens to worsen the divisiveness that plagues our politics and culture today. After all, if you never actually encounter people from a different class or social background, it’s much easier to demonize them.” In the first section of the book, Schwartz focuses on the privileged portion of the U.S. population, those men and women who can spend money to realize privileges that the majority of Americans could only dream about. The author’s chapter titles consist of just one word each, but those words speak volumes—e.g., “Envy,” “Exclusivity,” “Ease,” “Access,” and “Security.” The second section of the book, “Outside the Velvet Rope,” examines those individuals left behind, including those who used to be considered “middle class” in terms of income. While Schwartz expresses dismay about how so many owners of the businesses offering these discriminatory services seem to lack a moral compass—a sentiment that will resonate with nonwealthy readers—he does understand that the profit motive driving expensive privilege is unlikely to disappear in this ultracapitalist nation. Refreshingly, the author also discusses businesses that treat individuals of all income levels more or less equally, including Southwest Airlines, Starbucks, Best Buy, Target, and the Green Bay Packers NFL franchise, which is publicly held. Schwartz opens the book with a Bob Dylan lyric: “Money doesn’t talk, it swears.” Some readers may swear at the compelling yet maddening examples the author uses to illuminate the privileges reserved for the ultrawealthy. While Schwartz doesn’t offer many solutions, his description of the problem is well rendered.

An original entry in the growing literature on income inequality.