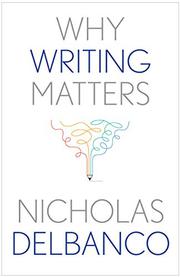 A veteran novelist and teacher of creative writing offers a salmagundi of ideas for the latest volume in the publisher's “Why x Matters” series.

The author of numerous novels and works of nonfiction, Delbanco (Curiouser and Curiouser: Essays, 2017, etc.), who has taught at Williams College, the University of Michigan, Columbia, and the University of Iowa, among others, returns with a series of diverse arguments to support the title. He begins with a section about teachers who influenced him (both on and off the page), focusing on John Updike, John Gardner, and James Baldwin, and he later notes the popular decline of the Johns and the rise of Baldwin. Delbanco then examines five texts that, he argues, have been enduring influences on “our daily behavior,” including The Communist Manifesto, Uncle Tom’s Cabin, and Lady Chatterley’s Lover, and he explores the concepts of originality, plagiarism, and imitation. Among the most original writers, he writes, are Flannery O’Connor and Virginia Woolf. Throughout, Delbanco offers comments about the history of writing and why it is so significant, and he laments the decline of truth in language (Donald Trump receives stern words). Interwoven into the narrative are playful and instructive moments for readers, and the author makes frequent use of famous quotations to support his arguments. In fact, the text is chockablock with quotations—some identified, some not (among the latter, “world enough and time” from Andrew Marvell’s “To His Coy Mistress”). Delbanco has a lot to say about teaching and offers some long—sometimes overlong—sequences about a writing seminar (with lengthy offerings by students) and eight pages devoted to the reproduction of a course syllabus he used for many years with his creative writing students.

Playfulness and gravity mix with quotations and creation in this mélange of styles, tones, and textures.

THE ART OF YOUTH
by Nicholas Delbanco
Nonfiction

ANYWHERE OUT OF THE WORLD
by Nicholas Delbanco
Fiction

THE VAGABONDS
by Nicholas Delbanco
Fiction