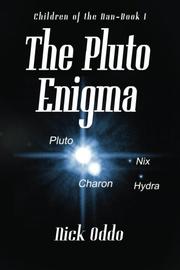 In Oddo’s sweeping debut novel, the first in a sci-fi trilogy, a man awakens from nearly a millennium of hibernation to discover his old life is gone but not forgotten.

At the turn of the 22nd century, a brilliant astrobiologist named Andrew Jackson volunteers to test his prototype for a hibernation system, technology that will eventually be deployed in a space program. Andy departs with his loved ones for a four-year sleep, but after his subterranean location is lost during a catastrophic earthquake, he wakes 900 years later than anyone had planned. As can be expected, the world is a very different place, and this installment of Oddo’s Children of the Nan trilogy is primarily concerned with Andy’s adjustment to his surroundings. Fortunately for Andy, the future isn’t such a bad place: The world is unified, and, thanks to biotech enhancements, humans are unable to harm each other. But the titular Pluto enigma perplexes even the greatest minds—and sentient computers. Oddo’s vision of the future is complex but finely detailed, and he uses Andy’s natural curiosity to reveal the history and advancements the unwitting time traveler missed. (There’s a pervasive reverence for the past, especially Scottish heritage and Native American culture.) Oddo brings an abundance of characters to assist Andy as he acclimates to his new reality, which in turn explains the new world to readers, too. But each of these characters is so helpful, and this projection of the future so utopian, there’s hardly a moment of conflict. There’s romantic tension and Andy’s heartbreak for the past he didn’t mean to leave so far behind, but for an experiment with such disastrous consequences, things don’t appear incredibly dire. Here, it seems Oddo is mostly setting the stage for the next installments, which are certain to contain more adventures, memorable characters and, hopefully, some answers to the Pluto enigma.

A love story 900 years in the making drives this first book in what’s poised to become an epic series.