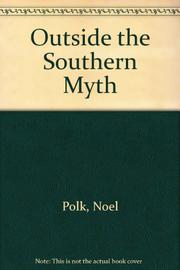 OUTSIDE THE SOUTHERN MYTH

 Faulkner scholar Polk's story pulls double duty as both personal history and a critical exploration of what he dubs the Southern Myth, which, he argues, has been perpetuated by both scholars and the media. One's burden as a Southerner, he asserts, is to be quite often defined by a ``tragic sense of history,'' a reality, he feels, that has been ``imposed on me by a group photo.'' As a Southerner, he says, ``I look into the mirrors of southern history and fiction and do not see much that has any direct relation to my life.'' Polk examines aspects of his experience as a son, an academic, a musician, a member of the Baptist Church, and a contemporary, though passive, observer of the civil rights movement. A large chunk of the book is given over to the story of the author's complex relationship with the Baptist Church's equally complex theology. He anatomizes himself as someone who early accepted, then abandoned, a calling to the pulpit. Polk will neither embrace nor repudiate the faith, though he clearly considers himself a survivor of what he describes as the loss of self occasioned by Baptist theology and practice. His method is to tell more about southern Mississippi culture at large than about himself, and his frequent references to southern fiction as touchpoints for conclusions about his own world may leave stranded those readers who aren't familiar with the sources. More personable, on the other hand, are his recollections of his high-school marching band and of a beloved bandleader who gave Polk, along with the gift of music, the gift of possibility (``perhaps the best gift of all''); or the recollection of touching base with family, self, and the past at an uncle's funeral. Polk's descriptions of the southern manner do reveal aspects of who he is, but his book is more serviceable as cultural commentary than autobiography.