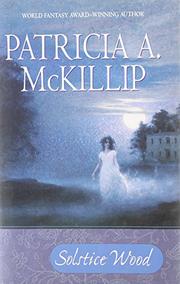 A contemporary revisit to Lynn Hall (Winter Rose, 1996), the huge, decaying mansion surrounded by thick woods where the boundaries between our world and the magical Otherworld grow thin.

Out west, when bookstore owner Sylvia Lynn learns from her tough, resolute grandmother, “Gram,” that grandfather Liam is dead, she’s curiously reluctant to return east, unwilling to stir painful memories—especially of her mysterious, unknown father, who vanished when she was a girl. At Lynn Hall, the clan has gathered around Gram; disheveled cousin Tyler; star-gazing great-uncle Hurley; Owen Avery, the hereditary protector of the hall, whose secret lover, Rue, is a fay; Owen’s daughter Dorian, whose boyfriend Leith is half-fay himself. Gram introduces Sylvia to the Fiber Guild, ostensibly a sewing circle, in actuality a coven whose magic stitches keep the passages to the Otherworld closed, because the Others are evil, beguiling humans only to betray them. Conversely, though, the Guild’s stitches confine the Others in a dank, gloomy, thorny prison. With Sylvia set to inherit Lynn Hall, the Fairy Queen decides it’s time to try to communicate. She snatches Liam into the Otherworld, leaving a twiggy changeling that, at first, only Sylvia recognizes. Leith agrees to help Sylvia find the way into the Otherworld, where she will try to find Liam—and perhaps discover the father she never knew.

As always, McKillip writes sparely, with elegance and precision, and this time disguises her usual insufficiency of plot behind an annoying and disconcerting succession of first-person narrators.

MORE BY PATRICIA A. MCKILLIP

THE FORGOTTEN BEASTS OF ELD
by Patricia A. McKillip
Sci-Fi

KINGFISHER
by Patricia A. McKillip
Sci-Fi

THE TOWER AT STONY WOOD
by Patricia A. McKillip
Fiction

SONG FOR THE BASILISK
by Patricia A. McKillip
Fiction