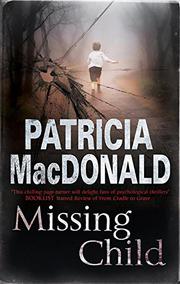 MacDonald (Cast into Doubt, 2011, etc.) tugs once more, and expertly, on the nerves of a vulnerable woman and her readership.

Two years ago, Caitlin Rogers’ teenaged brother James tearfully confessed that while he was out driving on a learner’s permit, he struck and killed a woman who turned out to be young mother Emily Eckhart. When Caitlin demanded that he go to the police, he took a fatal overdose of drugs. Caitlin, who went to Emily’s memorial service to tell the family what she knew, fell instead for Emily’s widower Noah, and married him without breathing a word. Now bad karma has come back on her with a vengeance. The day after the sixth birthday party of Noah’s son Geordie, he disappears somewhere between Caitlin’s car and the door of Hartwell Elementary, plunging his extended family into recriminations. As if Caitlin needed more trouble, James’ old girlfriend Karla, who’s turned from drugs to Jesus, pops up just in time to spill the beans Caitlin never could. Noah turns Caitlin out of his house in a cold fury; Detective Sam Mathis indicates that she’s no longer a reliable witness about Geordie’s disappearance; and when she gets a brief phone call from her stepson, everyone accuses her of fakery or complicity. It doesn’t help that the two people who are acting most suspiciously, apart from Caitlin herself, are Geordie’s uncle, sportswriter Dan Bergen, and Travis Pelletier, Geordie’s 10-year-old cousin.

The setup and the plot twists may be synthetic, but readers drawn in by the title will be rewarded by their immersion in Caitlin’s anxiety and the revelation of even darker secrets in the family cupboard.

THE GIRL IN THE WOODS
by Patricia MacDonald
Mystery

I SEE YOU
by Patricia MacDonald
Mystery

MARRIED TO A STRANGER
by Patricia MacDonald

A MEASURE OF BLOOD
by Kathleen George
Fiction

CITY OF THE SUN
by David Levien
Newsletter sign-up