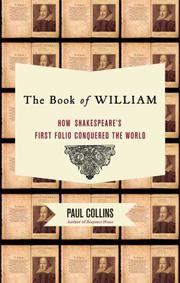 THE BOOK OF WILLIAM

The intricate, improbable story of how the first collection of Shakespeare’s plays (1623) became the holiest—i.e., most expensive—of grails in Biblioland.

Collins (English/Portland State Univ.) comes well equipped for his peripatetic task. Having written about bibliomania (Sixpence House: Lost in a Town of Books, 2003) and an iconic historical figure (The Trouble with Tom: The Strange Afterlife and Times of Thomas Paine, 2005), the author also possesses a lively curiosity and, to the enlightenment of readers of this galloping, globetrotting romp, an impressive travel allowance. As the Folio publishers divided the Bard’s plays into five acts, so too does Collins arrange his tale. Act One opens in a contemporary London auction room—a Folio sold for £2.5 million—but Collins soon returns to the 1620s to watch the surviving Globe colleagues of the recently deceased Shakespeare arrange with printer William Jaggard to print the 36 plays they have assembled—18 of which, Collins reminds us, didn’t exist anywhere else. No Folio would mean no Twelfth Night, Antony and Cleopatra, The Tempest or other gems. Collins then follows these First Folios through the centuries, pausing occasionally to educate us about the manufacture of paper, the difference between a folio and a quarto and the reputation of playwrights in general, Shakespeare in particular. Only obliquely does Collins address the “authorship question,” noting slyly that a Japanese scholar was the first to notice that all the flowers mentioned in the plays grow in the vicinity of Stratford-upon-Avon. The author also looks at the editions of the Bard’s plays that appeared after 1623—there were subsequent folios and editions by Alexander Pope and Samuel Johnson—and sheds some light on Bard-saving heroes unknown to lay readers—notably Lewis Theobald, who was so alarmed at the errors in Pope’s edition that he prepared his own. To see the best copies of the Folios, Collins interviewed experts and traveled from the vault of the Folger Shakespeare Library to a Japanese academic library.

DUEL WITH THE DEVIL
by Paul Collins
Nonfiction

THE BIRTH OF THE WEST
by Paul Collins
Nonfiction

MURDER OF THE CENTURY
by Paul Collins

THE MILLIONAIRE AND THE BARD
by Andrea Mays
Nonfiction

HOW SHAKESPEARE CHANGED EVERYTHING
by Stephen Marche
Nonfiction