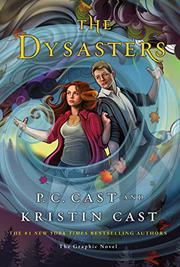 Teens discover they have elemental powers and are being hunted by their creator.

Foster Stewart has been on the run with her adoptive mother, Cora, for the last year, ever since Cora sold her supposedly deceased husband’s clinic. While attending a high school football game, she has a run-in with Tate “Nighthawk” Taylor, one of the players, only to find out he’s the reason they are in Missouri. Tate has always been special as the star quarterback in a small town—but his ability to see in the dark doesn’t hurt. Just before taking the field, a tornado hits, leaving the teens alone and on the run from the Core Four, the original, genetically modified group designed to control the elements in the fight against climate change. Now at a safe house set up by Cora, they are tasked with finding six other teens with elemental powers before Dr. Rick Stewart and the Core Four can get to them. The Casts, a mother-and-daughter writing team (Forgotten, 2019, etc.), craft a page-turning superhero origin story with a touch of romance. Bifulco’s (Three Sisters, 2018, etc.) black-and-white illustrations are expressive and intense, giving depth to each character’s emotions, although when elements are being manipulated the background is difficult to distinguish. Foster and Tate are white, and there is some diversity in secondary characters.

A good thriller for fans of Avatar: The Last Airbender and the Fantastic Four. (Graphic science fiction. 14-adult)