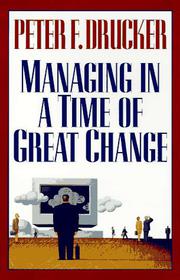 MANAGING IN A TIME OF GREAT CHANGE

Like the Energizer Bunny, Drucker just keeps on going, and going . . . beating the drum for perceptive, responsible management in the public as well as private sectors. As with many of the maestro's previous works (Post-Capitalist Society, 1993, etc.), most of the essays and interviews here have already been published (in Atlantic Monthly, Foreign Affairs, and elsewhere). Using as a departure point the apprehension that knowledge has become the Global Village's primary resource, Drucker comments on the realities of planning ahead, the sort of intelligence executives require to operate effectively, the consequences of shortchanging research budgets, the likelihood that for-profit enterprises could be obliged to pursue growth through alliances rather than through acquisition, and related topics. To a great extent, Drucker points out, the shape of things to come may be discerned from demographic and allied data that's readily available. In this context, he assesses where sizable new markets might emerge. Geographically, the author sees a wealth of potential in coastal China and other Pacific Basin outposts; commercially, he anticipates substantive opportunities in agrobiology, alternative energy sources, infrastructure projects (including telecommunications networks), pollution abatement, and retirement programs. Drucker goes on to caution that any state's domestic policies can profoundly affect the competitiveness of corporations subject to its jurisdiction. Accordingly, he argues, something more than lip service must be paid to the goal of reinventing government, in large part because the root cause of poverty for countries as well as individuals in tomorrow's world will be ignorance. Nor does Drucker overlook the importance of a so-called third sector, i.e., the nonprofit community-service organizations that address a modern nation's social challenges. In brief: wise, wide-ranging guidance on issues that promise to engage the attention of leaders and followers through the end of the century and beyond.
Pub Date: Nov. 16th, 1995
ISBN: 0-525-94053-7
Page count: 384pp
Publisher: Dutton
Review Posted Online: May 20th, 2010
Kirkus Reviews Issue: Sept. 15th, 1995

MANAGING FOR THE FUTURE
by Peter F. Drucker
Nonfiction

THE FRONTIERS OF MANAGEMENT
by Peter F. Drucker

How Do I Keep My Employees Motivated?
by George Langelett
Newsletter sign-up