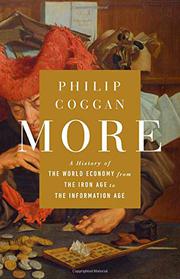 The History of the World Economy From the Iron Age to the Information Age
by Philip Coggan
BUY NOW FROM
AMAZON
BARNES & NOBLE
LOCAL BOOKSELLER
GET WEEKLY BOOK RECOMMENDATIONS:

“If it takes a village to raise a child, it takes the world to stock your house with goods”—a broad-ranging survey of world trade and the global marketplace.

Contrary to the stances of certain world leaders, including Donald Trump, trade is a good thing, and the freer the trade the better. So argues Economist columnist Coggan (The Last Vote: The Threats to Western Democracy, 2013, etc.) in this sweeping, nontechnical history of the rise of the modern world economy, which has taken a long, winding course over millennia. With the development of agriculture and settled towns and cities, labor was able to diversify and become specialized, with the scope of the economy broadening. A village first consumed only its own goods, but then the goods of the next village came into offer, and then the next, all aided by a growing network of traders, brokers, and other harbingers of the market economy. Throughout much of history, however, trade was sometimes an afterthought. As Coggan notes, “neither the Greeks nor Romans seemed to have believed that it was their duty to try to expand the economy as a whole,” leaving it to Chinese, Arab, and Persian entrepreneurs to develop transcontinental trade routes. Europe later pulled ahead in a time of exploration and expansion, one that, in its mature phase, the author attributes to three factors: inexpensive transport, rising wages, and an improvement in living standards. The U.S. was a locus of this broadened economy. Coggan looks into past trends to suggest the outlines of future ones, such as a continued debate over state control of the economy. “Silicon Valley tycoons may think that they are setting the intellectual agenda with their calls to shrink the state,” he writes, “but for many people in the rest of the world, the more appealing example is China, with its heavy state direction and near 40-year record of rapid growth.” That widespread trade enriches is one thing, Coggan says, looking to the developing world, but it also serves as a means of encouraging democratization everywhere.

A sharp, readable introduction to how the modern economy came to be.