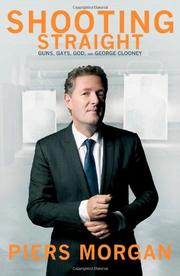 Morgan, who was, at 28, the youngest editor in chief of London's notorious Sunday tabloid News of the World, was one of the few in media circles who was not surprised when he was named to take King's prime spot weeknights at 9:00 p.m. on CNN. Though well-known, if not always well-regarded, in the U.K. for his stints atop Fleet Street tabloids, Morgan was known mainly in the United States for his snarky commentary on NBC's summer hit America's Got Talent. Here, the author tells the story of his success as host of Piers Morgan Live, from its prelude in the summer of 2010, to his debut in January 2011 and through the spring of 2013. His first year coincided with, among other major news stories, the Arab Spring, the Japanese earthquake and tsunami, and the deficit-ceiling showdown between the Obama administration and congressional Republicans—all very good for ratings, he writes. The election year brought a sophomore slump, and it wasn't until a spate of gun-related mass murders that Morgan writes he finally hit his stride and found his voice. Against the advice of his seasoned producer, Morgan refused to hide his contempt for America's gun culture and its spokespersons, who appeared on his program. After the Sandy Hook massacre in December 2012, Morgan became the target of an Internet campaign, instigated by radio talking head Alex Jones, to deport him for his anti–Second Amendment outspokenness. Perhaps since so many of his diary entries reflect a glibly superficial and conventional view of politics and celebrity culture, Morgan's gun crusade can seem motivated less by bravery and conviction than by brand consciousness and a hunger for ratings.

Will provide an enjoyable fix for news junkies but not much substance to others.