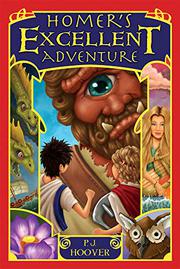 An ancient Greek preteen on the verge of flunking school gets a chance to sail with Odysseus.

Given but 10 days to compose an epic yarn as a class project or be expelled, despairing young Homer finds himself transported into the recent past along with Dory, an enslaved friend with a secret, to the dark and smelly belly of a big wooden horse. That’s only the first stop on a wild string of encounters with drug-dealing lotus-eaters, cannibal Laestrygonians, dead spirits, vicious storms (“We were hosed. There was no getting around it. Making the gods mad was a really bad idea”), and, of course, monsters galore. Recording it all as he goes on an unusually capacious magic scroll, Homer picks up pointers about word choice and grammar, selection of detail (“I’d add more gory details, but it might not be appropriate”), character development, and other writerly skills with much blatantly editorial prodding from Dory. Hoover leaves out the Telemachus and Penelope plotlines but otherwise follows the Odyssey’s general course before closing with happy endings for Homer and Dory both, plus appended lists of people and places, a disquisition on dactylic hexameter, and (for some reason) a recipe for hardtack. Homer presents white, as does Dory, but notes early on that Odysseus and his “guys” all have dark skin, “the color of ebony.” Final art not seen.

Awesome reading that will be most particularly appreciated by those already familiar with the original. (map) (Epic fantasy. 11-13)

MY EPIC BATTLE TO SAVE THE WORLD
by P.J. Hoover
Children

THE STORY OF MY IMMORTAL LIFE
by P.J. Hoover
Children