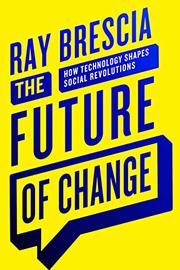 THE FUTURE OF CHANGE

According to this precise academic study, advances in communication drive progressive social movements.

“Changes in the ability to communicate seem to create an environment in which social movements can emerge, embrace the new technology, and use it to advance the change they wish to see in the world.” So writes Brescia (Law and Technology/Albany Law School; How Cities Will Save the World: Urban Innovation in the Face of Population Flows, Climate Change and Economic Inequality, 2016) early on, emphasizing that successful movements accomplish three things. First, they harness the latest means of communications to further their goals. The postal service and the steam-powered printing press, which reduced newspaper printing costs from 6 cents to 1 during the 1830s, allowed the abolitionist movement to flood the nation with its literature. In the 1950s and ’60s, TV spread support of the civil rights movement, delivering vivid scenes of violence to a white America largely neutral at the beginning. Second, movements form “trans-local, grassroots networks” connected to larger, often nationwide organizations. Local bonds facilitate the coordination of action at the local, state, and national levels to promote social change. Brescia describes the passage of the GI Bill of 1944, the result of a massive nationwide campaign. Third, they unite members through positive, inclusive, optimistic “messages” that stress common interests. The author works hard, with some success, to find a silver lining in the explosive communications revolution that began with computer-generated mailing lists in the 1960s and continues with the pervasive internet, mobile devices, and social media, which both unite and isolate individuals and vastly increase the exchange of information, not all of it accurate. Most readers will agree that Brescia is on to something, but he lays out his ideas in dense prose more acceptable to a scholarly audience.

An insightful but prolix analysis of how social movements take advantage of media technology.