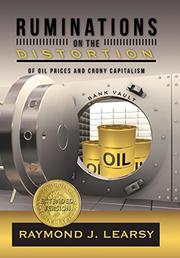 Ruminations on the Distortion of Oil Prices and Crony Capitalism

In this fiery collection of blog posts, veteran commodities trader Learsy (Oil and Finance, 2012, etc.) rails against the global oil-industry.

According to the oil industry, oil is a commodity that’s subject to the forces of supply and demand. But this is far from the complete truth, writes Learsy, a regular contributor to the Huffington Post who made his fortune as founder of a worldwide commodities trading firm. Oil prices, he asserts, are captive to the machinations of commodity speculators, investment banks, OPEC and petroleum heavyweights such as Russia. These entrenched interests can influence U.S. policy at the highest levels, he says, and distort prices for their own benefits. “We are robbed of billions of dollars every day by oil interests, in their manipulation of the market pricing mechanisms, at massive cost and risk to the world’s economy,” he writes. Penned with a hefty dose of what the author calls “rightful anger,” the book looks at a turbulent 18-month period from January 2012 to May 2013 that witnessed the 2012 U.S. presidential election, oil prices spiking more than 9 percent in a single day and revelations of JP Morgan Chase’s “London Whale” trading debacle. Learsy’s blog entries address a range of oil-related topics, and his central theme soon emerges: The oil market has been hijacked by profiteers who game the system. Learsy alleges cronyism and inept oversight by the U.S. Commodity Futures Trading Commission, the U.S. Department of Energy, Congress, the courts and multiple presidential administrations. His posts combine insider knowledge and trenchant wit, and he isn’t afraid to rebuke people when he feels they deserve it—including former Energy Secretary Steven Chu, Saudi Oil Minister Ali al-Naimi and JP Morgan Chase head Jamie Dimon. The book suffers, however, from a limitation that’s common to blog-based collections: Its brief chapters whiz past like a series of editorials instead of probing deeper like an investigative exposé. That said, the author’s stated goal is to educate everyday consumers, and as such, the book effectively elbows its way into the growing Main-Street-fights-back genre.

A rallying cry for readers who feel ripped off at the gas pumps.