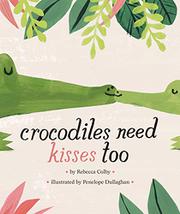 Rhyming verses with bang-on scansion declare that animals who are considered noncuddly still need cuddles: “Despite their lumpy, bumpy hide, / toothy mouths stretched open wide, // just like me and just like you, / crocodiles need kisses too.” These porcupines, rattlesnakes, vultures, sharks, tigers, tarantulas, and gorillas also need squeezes, nuzzles, smooches, and tickles. The animals’ textually described dangerousness juxtaposes with the art, which shows gentle creatures: A rattlesnake’s “pointy fangs” are too rounded to puncture anything; tigers evoke mischievous toddlers; a porcupine’s “prickly spines, / sharpened quills raised up in lines,” far from being raised, actually angle downward as the critter peers meekly out from behind a tree. A shark fin is daunting, and a tarantula’s huge legs crawling out toward readers may startle them, but both sharks and tarantulas have affable smiles and harmless, curved bodies after each page turn reveals the whole creature. An ending twist changes the crocodile into a (brown-skinned) child in a crocodile suit, receiving hugs from a (lighter-skinned) adult. Dullaghan’s illustrations use acrylic paint texture well. However, they have a casual air and a lack of punch that, instead of creating meaningful juxtaposition with the verses, dilute the text’s hardiness and specificity. Sometimes the art leans toward the saccharine—rattlesnake bodies forming a heart—and Colby’s cloying ultimate moral that “children need affection too” isn’t particularly useful to child or adult readers.