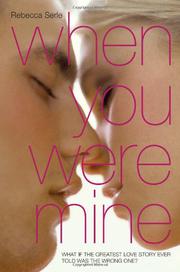 WHEN YOU WERE MINE

Romeo and Juliet is recast as a love triangle set at a tony Southern California private school.

Rosaline the narrator points out in the prologue that "before Juliet ever came into the picture," there was Rosaline, whom Romeo had initially gone to the ill-fated party to see. "Romeo didn't belong with Juliet; he belonged with me." Here Romeo is Rob Monteg, the boy next door, and now, at the beginning of senior year, Rose Caplet hopes her oldest, best friend may be on his way to becoming her boyfriend. It seems, well, fated—but then her cousin Juliet, daughter of her estranged uncle and aunt, moves back to town and captivates Rob. Serle gives Rose two staunch, beautiful, rich, label-conscious friends, with whom she sits at the top of the high-school food chain. She also gives Rose an antagonist, class outcast Len, who, predictably, becomes more and more attractive as the year progresses and Rob and Juliet play tongue-hockey in public. Readers who try to draw correspondences with the play will find themselves frustrated; is Len Mercutio? Tybalt? They will also find the tawdry truth behind the Caplet-Monteg feud unconvincing. There might have been an interesting story about friendship under here, but it was buried by the high-concept superstructure.

Take an archetypal story out of Renaissance Verona and couch it in relentlessly ordinary present-tense prose, and all that's left is banal chick lit. (Fiction. 14 & up)

THE EDGE OF FALLING
by Rebecca Serle

ANYONE BUT YOU
by Kim Askew
Children