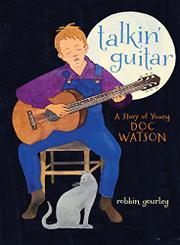 This affectionate portrait of guitar great Arthel “Doc” Watson focuses on his formative musical influences during his Appalachian childhood.

Gourley’s lyrical prose incorporates occasional diction derived from the setting. “Yonder, where blue mountains meet the sky, Arthel Watson was born into a world of music.” Arthel listens intently—to farm animals, a distant train, peeping frogs and more. He has “ears like a cat.” A page turn reveals an inky-black double-page spread and one stark, speculative sentence: “Maybe it was because he was blind.” Arthel’s “heart full of melody” can’t be contained. He drums on pots and strums a steel wire strung to the sliding barn door. His Pappy gives him a harmonica, makes him a banjo and buys his first guitar, from which Arthel’s inseparable. Arthel learns farm chores, practicing guitar in between. “He reckoned if he could work like everyone else, he could play music like the folks he heard on the records and the radio.” The narrative ends with a beginning and an image of a taller Arthel, guitar in hand. Gourley’s watercolors, while often lovely, depict Arthel unevenly, with some spreads appearing less finished than others. For example, the boy’s strawberry-blond hair is, at turns, textured with light pencil strokes, heavily crayoned or left untouched.

A HOUSE IN THE SKY
by Steve Jenkins
Children

FOREST HAS A SONG
by Amy Ludwig Vanderwater
Children

LITTLE MELBA AND HER BIG TROMBONE
by Katheryn Russell-Brown
Children