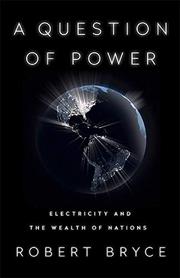 A QUESTION OF POWER

Shocking revelations about electricity, “the apex predator of the energy kingdom.”

Vladimir Lenin once said, “communism is Soviet power plus the electrification of the whole country.” Energy journalist Bryce (Smaller Faster Lighter Denser Cheaper: How Innovation Keeps Proving the Catastrophists Wrong, 2014, etc.) writes that there are three categories by which the 200-odd nations of the world can be classified: the “unplugged countries,” with electricity use under 1,000 kilowatt hours/capita/year; the “low-watt” countries, from 1,000 to 4,000 kWh; and the “high-watt” countries, where electricity use exceeds 4,000 kWh annually. In keeping with other economic gauges, it’s disheartening to note that almost half of the planet’s population falls into the first category, while many former communist nations are in the second, and the third, not surprisingly, has a far higher average GDP than the rest—and comprises less than 20% of the world’s total population. Like so much else in the world, electricity is unevenly distributed, with marked disparities. Not that anyone should feel secure in the wealthier domains: Climate change is wreaking havoc with the grid while “saboteurs are constantly probing for weaknesses.” With a growing world population, especially in developing countries, increased demand will prove a problem. As in past books, Bryce considers renewables to be less efficient than the fossil fuels that seem not yet to have reached their peak, to say nothing of nuclear power, which he advocates, deeming himself a “proponent of what I call N2N, or natural gas to nuclear.” As he writes, “the hard reality is that there are no quick or easy solutions. Energy transitions take decades.” That more fossil fuels mean more climate change doesn’t seem to faze the author, but hard geopolitical and economic realities do: Iraq is now dependent on Iran for about 15% of its energy “despite objections from the Donald Trump administration,” and the “Giant Five” tech companies—Apple, Amazon, Google, Facebook, and Microsoft—“are creating their own private grids,” becoming, “in effect, electric utilities.”

A robust look at where the juice flows around the planet—and its planetary implications.