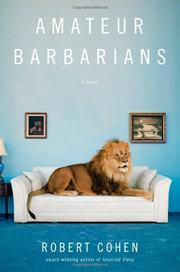 These barbarians aren’t anything terribly special—they are, after all, amateurs—but they do have their quirks, caprices and hang-ups. Teddy Hastings is the principal of a New England middle school. He has health problems—could it be cancer?—and he gets jailed briefly for taking nearly-nude pictures of his teenage daughter Mimi for a photography course. After his brief but embarrassing incarceration, he takes off for Africa, chasing his errant daughter Danny, whose junior year abroad morphed into a desire to see the world. Dilettante Oren Pierce, a modern man who’s tried a little of everything but can’t settle down or commit to anything, begins teaching at Hastings’ school; while Teddy is in Africa, Oren has an affair with his wife Gail. In one hilarious episode, Oren covers a class for a seriously ill colleague, a situation that confirms he’s totally unfit for dealing with adolescents filled with equal parts of phlegm and ennui. Like many other adults in Cohen’s fictive world, Gail is edgy, cynical and apathetic. She and Oren enter their affair out of lethargy rather than out of mutual attraction. Gail’s take on her life is drearily unremarkable yet filled with casual despair: “Try working for a firm that’s barely solvent, in a town that’s not too solvent either. Try coming home to a daughter who hates you, and a husband who’s been publicly humiliated and won’t go out of the house.” At first rather tightly woven, the narrative eventually fragments into luminous but loosely connected vignettes of Gail and Oren’s life in New England juxtaposed with Teddy’s doomed attempt to re-establish a meaningful relationship with Danny. Cohen has a superb ear for the rhythms of suburban speech, for the offhand nonchalance with which people dismiss each other’s dreams, and for the murky monotony of desperation.

Brilliant slices of life don’t quite cohere into a satisfying whole.

THE HERE AND NOW
by Robert Cohen

Something Is Rotten In Fettig
by Jere Krakoff
Newsletter sign-up