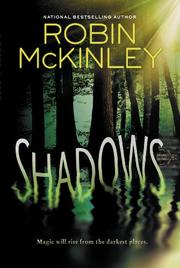 This book is not the eagerly anticipated follow-up to Pegasus (2010). The sooner readers get past that, the sooner they can dive into the stream-of-consciousness, first-person narrative, which rushes along despite the fact that not very much happens for quite a while. Magic versus science: In Maggie’s world, an alternate Earth, civilized countries like the U.S. are Newworld, all science all the time, while everyone else is Oldworld, magic steeped and probably pretty dreeping awful. McKinley shines when she invents new worlds, slang and all, and she is clearly having some fun with her bright but cranky teen heroine. Maggie unexpectedly finds herself, her unusual algebra book, her motley friends and lots of critters (both origami and real) caught in the middle of a massive “cohesion break” that could destroy the world. Newworld Maggie, who sees shadows around her secretly-a-magician Oldworld stepfather, might be in a position to save everyone, which provides some action in the second half, but this is a slow, immersive read despite the high stakes, more concerned with family and friendship than pacing.

McKinley’s writing is an acquired taste. While this is not the book to start with, for those who have already fallen under her spell, it’s bound to appeal. (Fantasy. 12 & up)

THE POWER OF THE CRYSTALLINE TREES
by G.C. Ramirez
Newsletter sign-up