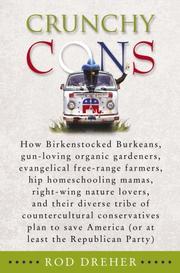 Thirtysomething journalist Dreher preaches a political third way, entreating well-meaning Republicans to repair the world and to play nicely with those detested lefties.

The programs of the left and the right, he proposes, may be equally concerned with faith, family and community. With ecclesiastical fervor, he urges “crunchy” conservatives and open-minded Republicans to take a new view of some touchstone topics. Technology alone is not an ultimate value, right-wingers are reminded. Slow food is better than fast food, and home cooking releases some nice enzymes. The author shops at Whole Foods, listens to NPR and thinks McMansions can’t beat the Arts and Crafts bungalows of old. A clean environment is essential, and he looks forward to the greening of the GOP. Forget about raw materialism and remember family values, he pleads (Mrs. Dreher and their kids are presented as testimony to those values). Religion is paramount to the author, an earnest recruit to the Church of Rome who, like W, finds redemption in his faith. Indeed, Christianity, or its reasonable facsimile, is the bedrock of the crunchy conservative program Dreher first proposed a few years ago in the National Review. It should be noted, however, that the primary conservative feature of this counterculture Gospel According to Rod is the title claiming conservatism. Much of Dreher’s flower-child presentation—he offers lessons from Russell Kirk, E.E. Schumacher and Wendell Berry along the way—can be subscribed to by lefties and libertarians alike.

An idealistic manifesto from and for the right wing, insistent on goodness, before it’s too late.

HOW DANTE CAN SAVE YOUR LIFE
by Rod Dreher
Nonfiction