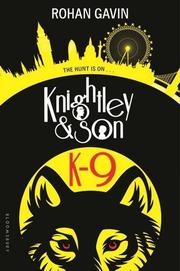 The second in the Knightley and Son series gets a little darker, offering more bite, tragedy and paternal dysfunction, as well as respectable levels of gore.

Darkus Knightley is the primary tool his periodically comatose father, Alan, taps to continue investigating the elusive criminal gang, the Combination. At the end of Knightley and Son (2014), their partnership looked promising and, optimistically, so did their fractured familial relationship. As the book opens, however, paterfamilias is working alone again. Darkus, left in the company of an incontinent but loyal former war dog, discovers something afoot. A number of dogs are missing at Hampstead Heath, and enormous, bloodthirsty mutts are appearing during full moons to maul police officers (werewolf theories abound). Pressing his father to work together again, Darkus finds that Knightley’s suggestion that they be a detecting duo was more of a pacifier than a promise, and the feeling of abandonment returns. This is readable as a stand-alone, but familiarity with the first installment will give readers the full scope of Darkus’ frustration with a physically and emotionally absent father. Though it suffers some from second-book syndrome, its closer examination of the father-son relationship, the endearing boy-and-his-dog thread, the conversely violent thrill of the occult, and one of the creepiest, multifaceted villains this side of Moriarty will ensnare readers.

A teeth-gnashing thriller more macabre than its predecessor, it will have readers (ahem) howling for a third. (Mystery. 10-14)

3 OF A KIND
by Rohan Gavin
Children

KNIGHTLEY AND SON
by Rohan Gavin

NOTHING BAD IS GOING TO HAPPEN
by Kathleen Hale
Children

NO ONE ELSE CAN HAVE YOU
by Kathleen Hale
Children