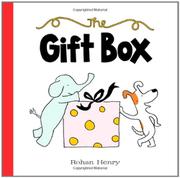 Elephants have a storied history in children's literature, from beloved Babar all the way up to Mo Willems' current kid-favorite Gerald. Here, a new elephant family enters the pantheon.

Reminiscent of the books about both precursors, with an uncluttered design characterized by pale illustrations outlined in black on a clean, white background, this features Ollie, an elephant child, and his best friend Benjamin, a young dog. Ollie has been (over?)praised by his doting mother, who calls him a "beautiful gift." When Ollie tries to get Benjamin to guess what he is, expecting Benjamin to say just what Mama Elephant did, Ollie's disappointed with Benjamin's heartfelt and kind answer: "That's easy...You're my best friend." Ollie tries and tries to get Benjamin to give the "right" answer, disregarding each of Benjamin's well-meaning attempts, resulting in sadness and frustration on both friends' parts. This rings true for many young children, who are apt to see the world in only one way at first. It takes time—and, often, trial and error—to develop empathy.

The open-ended finish is ingenious and satisfies without being too neat; young listeners may respond to the cue to come up with Ollie's dearly-wished-for response, or they may come up with creative ones of their own. (Picture book. 2-6)

CAN I PLAY TOO?
by Mo Willems
Children

I AM INVITED TO A PARTY!
by Mo Willems
Children

THE HOLE IN THE MIDDLE
by Paul Budnitz
Children

I WILL SURPRISE MY FRIEND!
by Mo Willems
Newsletter sign-up