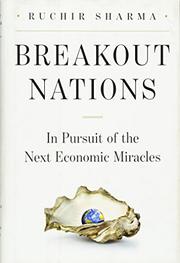 In Pursuit of the Next Economic Miracles
by Ruchir Sharma
BUY NOW FROM
AMAZON
BARNES & NOBLE
LOCAL BOOKSELLER
GET WEEKLY BOOK RECOMMENDATIONS:

No first-book jitters for Sharma, longtime columnist for the likes of Newsweek and the Wall Street Journal. His smooth, almost chummy style suits him ideally for guiding civilians through the sometimes-arcane thicket of the dismal science, looking for those emerging markets likely to disappoint or exceed expectations in the coming years. Sharma insists on the importance of on-the-ground observations, and he’s recently visited all the countries discussed here. While recognizing that factors explaining growth change continually, he divulges some helpful, broad rules of the road. We learn, for example, why a particular nation’s form of government counts less than the economic understanding and vision of its leaders, why the size and growth of a nation’s second city is important and why the list of top-ten billionaires matters. He offers informed speculation on why Russia’s Putin may have outlived his usefulness, why Sri Lanka, the Philippines, even Nigeria may finally be headed in the right direction, why Mexico continues to underperform, why Poland and the Czech Republic find themselves in the “sweet spot” of Europe, why the coming slowdown in China will feel like a recession and why Indonesia’s new “efficient corruption” counts as an improvement over the old way of doing business. Sharma drills down even further, noticing and explaining the significance of the price of a hotel room in Rio, a single electromagnetic railroad in China, the road conditions in Vietnam, the decibel level of late-night revelry in a Turkish club, the popularity of Korean soap operas, jammed traffic in Jakarta or dangerous street crime in Johannesburg. Confining his predictions to the near future, Sharma refreshingly comes across as that rare thing Harry Truman once sought: a “one-handed economist” willing to stake his reputation without resort to “on the other hand” equivocation.

For investors looking to place their bets and for general readers looking to understand the global economic landscape in the wake of the Great Recession.

WHAT IF LATIN AMERICA RULED THE WORLD?
by Oscar Guardiola-Rivera
Nonfiction

BRAZIL ON THE RISE
by Larry Rohter
Nonfiction