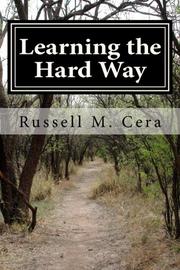 A writer remembers a troubled youth haunted by a violent father and the premature death of his mother.

Cera (A Collection of Outdoor Tales, 2012, etc.) was “not a very well-liked child”; in fact, he didn’t particularly like himself. He was an impetuous boy inclined to court disaster or at least to follow his friends in its direction. As the title of his memoir suggests, he tended to learn only from the consequences of his rashness. His toughest years, he recalls, spanned from elementary school through high school—after his mother, Mary, left his father, Dante, the author was left to contend with his “volatile temper” and his “dark, disturbing side.” Cera eventually moved in with his mother, but found the living arrangement emotionally unmanageable after she became afflicted with cancer, a disease that ultimately took her life. With admirable candor, the author movingly reflects on the shame he felt over his abandonment: “I hated myself as I felt the searing metal hand grab my heart and twist it, but I knew I could not stay with her.” He moved back in with his father and faced the hysterical contempt of his stepmother, Miriam, and the savage beatings his father made her endure. Cera’s book is structured as a series of vignettes, slices of personal history that poignantly paint a picture of youthful struggle and disappointment as well as their ramifications on his early adulthood, including a marriage that failed painfully. The author’s account is deeply confessional: Intimately openhanded, he never spares himself from criticism. And while the tone can be darkly melancholic, this book isn’t a lugubrious lament. In fact, Cera celebrates the life he eventually crafted for himself, including a happy marriage and the hard-earned wisdom that made such self-improvement possible. But this is an intensely idiosyncratic tale, and it’s not obvious that it will appeal widely beyond the sphere of the author’s loved ones. And while the remembrance can be emotionally powerful, it’s written in plain, poetically unadorned prose.

A thoughtful and inspiring but idiosyncratic reflection on a shiftless youth that may not command a broad readership.

FRUIT OF THE BAD SEED
by Russell M. Cera
Indie