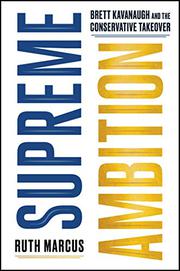 Based on a massive amount of material, including thousands of pages of Kavanaugh’s emails and nearly 300 interviews, the author chronicles both the career of a jurist whom she has known—“not well,” she adds—for 25 years and the strident political machinations involved in confirming a judge to the highest court. When Anthony Kennedy announced his retirement, he warmly recommended Kavanaugh, his former clerk, to Donald Trump. At the time, Kavanaugh was not on the rarefied list endorsed by the conservative Federalist Society, which feared he was not ideologically reliable; in addition, Trump considered him suspect because of his association with George W. Bush. But Kavanaugh, whom peers once voted “among the most likely to become managing partner of a law firm,” who was “more diligent than obviously brilliant,” had assiduously shaped his career with the Supreme Court in his sights. Carefully chosen clerkships, affiliation with Kenneth Starr in investigating Bill Clinton, and a position on Bush’s staff (not to mention marrying Bush’s personal secretary) led to a confirmation, at the age of 38, on the appeals court in D.C., a coveted steppingstone to the Supreme Court. Marcus reveals in lively detail the rivalries and enmities involved in his nomination and confirmation hearings—even before allegations of sexual misconduct surfaced. She considers Dianne Feinstein, the ranking Democrat on the Senate Judiciary Committee, “miscast” in her role of representing her party’s interests: too old, distracted, and passive. Feinstein, Marcus asserts, “thought it was unseemly” for Democrats to be investigating Kavanaugh’s views on abortion and presidential power, issues of deep concern. Much to Democrats’ frustration, Feinstein badly mishandled Christine Blasey Ford’s case, a matter than resulted in infighting and hand-wringing within both parties and ended with a “flawed and limited” FBI investigation. Kavanaugh’s tenure on the court, Marcus believes, has been unalterably tainted by the process.

An illuminating and evenhanded look at an incendiary event.