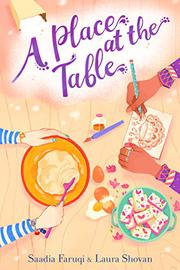 A PLACE AT THE TABLE

Pakistani American sixth grader Sara is sick of cooking. It’s bad enough that the demands of her mother’s catering business fill Sara’s free time. But when her mother starts teaching a South Asian cuisine class at Poplar Springs Middle School, the school Sara transfers to from her beloved Islamic school, Iqra Academy, she’s forced not only to watch her mother cook, but also to watch her new, xenophobic classmates balk at Sara’s favorite spices. Elizabeth, on the other hand, loves cooking—perhaps because her English-immigrant mother, who suffers from depression, and her American-born father, who is always traveling, never seem to find the time to make proper meals. When Elizabeth is paired with Sara, the two of them form a friendship—until Elizabeth’s best friend’s racism threatens to separate them just when they need each other most. Writing in alternating voices, the authors elegantly interweave issues of racism, financial insecurity, and mental illness into a familiar middle school narrative of identity formation. Sara’s character is particularly well drawn: Her affectionate family, her insistence on Elizabeth’s responsibility to stand up to her white, racist friends, and her love of her culture and religion are refreshingly authentic. Elizabeth’s mostly secular Jewish family life will also ring familiar to many readers. At times, however, the narration verges on preachy, and the dialogue feels more mature than the average sixth grade banter.

This tale of a diverse friendship tackles hard topics. (Fiction. 10-14)