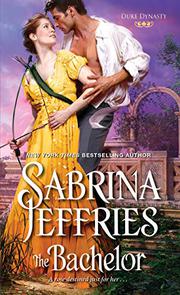 A war veteran and a woman who has suffered a personal betrayal are thrown together during her debut London season in 1809.

Gwyn Drake is a 30-year-old heiress who’s been avoiding marriage because of a past liaison that threatens to cloud her future prospects. When her brother asks their cousin by marriage, estate gamekeeper Maj. Joshua Wolfe, to be her bodyguard in London, she worries about keeping her secrets from both and avoiding infamy. Seriously wounded and left with a disability after a naval battle, Joshua just wants to serve his country again, but being forced to spend time with Gwyn is tempting him to risk intimacy and marriage. The novel is concerned with representing veterans’ issues, notably PTSD, and with highlighting the unfair and unequal consequences, physical and emotional, that women face in sexual relationships, especially with predatory men. Gwyn’s wariness also comes from her wealth (and Joshua’s lack thereof) while his stems from his leg impairment and scarring. Though the themes are worthwhile, the romance is uneven in tone, with sudden bouts of passion between the couple interspersed with arguments, doubts, and dishonesty. Most of the episodes, whether in parks, ballrooms, or London streets, feel wooden, never quite allowing readers to identify with the feelings of the characters. The villain does double duty as both Gwyn’s ex and the major’s professional antagonist but feels like a plot device without substance. A related subplot about espionage is an unnecessary addition meant to pad out the story’s drama. The novel also relies a little too much on the reader’s prior knowledge of the family—it is the second in Jeffries’ Duke Dynasty series (Project Duchess, 2019, etc.)—and some details require a rereading to register.

Standard Regency fare with a cast of gentry who are fairly indistinguishable from many such characters.

SEDUCTION ON A SNOWY NIGHT
by Madeline Hunter
Fiction

THE STUDY OF SEDUCTION
by Sabrina Jeffries
Fiction

'TWAS THE NIGHT AFTER CHRISTMAS
by Sabrina Jeffries
Newsletter sign-up