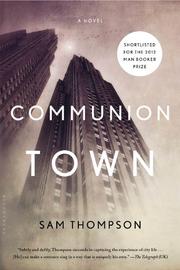 This debut by a British writer, touted as a novel, is in fact a collection of 10 linked stories, the link being an imaginary city. What kind of city? One that’s fearful and divided against itself.

In the title story, two young men, immigrants, are closely monitored after their arrival. The fear is that they might have dealings with the Cynics, vicious pranksters who terrorize commuters, or the so-called monsters, ostracized vagrants with hearts of gold. The class divisions are stark in "The Song of Serelight Fair." A poor rickshaw puller is taken in by a rich girl, who buys him a guitar and encourages his songwriting, all the while manipulating him. These are broad strokes. They establish a framework but little else. One story ("Three Translations") has a fascinating reference to a city ritual, a festival for its unmarried men, but fails to exploit it. There is also a boogeyman loose in the city’s gritty neighborhoods. Sometimes he’s a serial killer, as in "Good Slaughter," the collection’s dramatic high point. Elsewhere, in "The Rose Tree" and "A Way to Leave," which rework the same material, he’s a pitiful thing with a secret so terrible that, once heard, it will turn one into a zombie. Both stories lean heavily on innuendo, as does "Outside the Days," in which a young libertine, a contemporary Dorian Gray, falls into a pit of depravity. “I’d be more specific if I could,” says the narrator lamely. Two others inhabit rarefied worlds with literary echoes. "Gallathea" turns the world of a private investigator inside out; it’s served with a big dollop of Chandler, a splash of Burgess and a twist of classical mythology. In "The Significant City of Lazarus Glass," an investigator-turned–criminal mastermind battles four former colleagues; it’s an elaborate spoof of Holmes-ian deductive techniques.

A versatile writer struggles to find his voice in this scattershot collection.

THE NATURAL ORDER OF THINGS
by Kevin P. Keating
Fiction