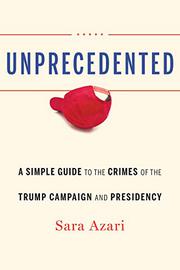 A Simple Guide to the Crimes of the Trump Campaign and Presidency
by Sara Azari
BUY NOW FROM
AMAZON
BARNES & NOBLE
LOCAL BOOKSELLER
GET WEEKLY BOOK RECOMMENDATIONS:

A concise guide to the crimes involving Donald Trump and six of his associates that were covered in the Mueller Report.

There is nothing new in this examination of the crimes of Trump and his associates and explanation of the Mueller investigation; everything in it has been thoroughly covered by the press. Nevertheless, this brief yet in-depth book is a gem. Its strength is that first-time author Azari, a lawyer who specializes in white-collar crime, simplifies the lengthy, massively detailed, and documented report, breaking it down into an easy-to-read explanation from a nonpartisan viewpoint. The author opens by laying out the crimes committed by George Papadopoulos, Lt. Gen. Michael Flynn, Rick Gates, Paul Manafort, Michael Cohen, and Roger Stone, all of whom were convicted or pleaded guilty, and how they relate to Trump. But the book’s most powerful section is Azari’s detailing of the acts of obstruction of justice allegedly committed by the president. She examines his attempts to stop, limit, and redirect the Mueller investigation; fire the special counsel; enlist others to create false evidence about his own conduct; and prevent and dissuade witnesses from cooperating in investigations into him and his campaign. Especially powerful is the author’s list of nine instances where Trump could be charged with crimes were he not president. In each case, Azari explains the crimes and the legal checklist prosecutors had to meet for conviction, matches them to available evidence, and, based on her legal knowledge, places each case in one of three categories: Evidence exists to prove guilt beyond a reasonable doubt; evidence might be sufficient to prove guilt beyond a reasonable doubt; and the evidence appears insufficient to prove guilt beyond a reasonable doubt. She found sufficient evidence to convict in five cases, maybe enough evidence in three, and insufficient evidence in one.

Perfect for anyone seeking an authoritative understanding of the Mueller investigation from a dispassionate source.