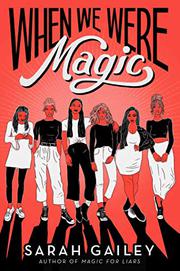 WHEN WE WERE MAGIC

Getting through high school requires more than a little bit of magic.

On prom night, when Alexis accidentally kills Josh Harper, she panics and summons her five best friends—Paulie, Roya, Iris, Marcelina, and Maryam—for help. Alexis knows she can rely on them, not only because of their unshakeable friendship, but because of what they have in common: the ability to do magic. Attempting to make things right, the girls cast a spell but are left with a disconnected collection of Josh’s body parts, including a cold, glassy version of his heart. They divide them up and agree to dispose of what is left of Josh, piece by piece. Alexis insists on witnessing each body-part-releasing ceremony, in the process exploring her bonds with her friends—and, in one case, feelings that go far beyond friendship. But as their relationships strengthen, the spell takes its toll: Every time they lose a body part, the girls lose something too, forcing them to rethink how they define themselves and each other. This work of speculative fiction is a profoundly thoughtful exploration of female friendship, love, growth, and identity. The fully realized characters are diverse in ethnicity, sexuality, and gender identity. While the final two-thirds of the book are beautifully paced, balancing introspection and character development with plot, the first third at times feels weighed down by explanation and backstory.