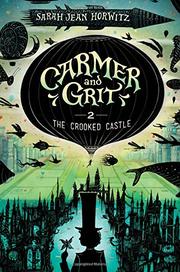 An erstwhile magician’s assistant and a renegade faerie princess investigate a steampunk circus in this fantasy follow-up to The Wingsnatchers (2017).

Felix Cassius Tiberius Carmer III and Grit (nee Grettifrida Lonewing), still reeling from their first adventure together, are traveling leisurely southward when they crash into Bell Daisimer, daredevil balloonist. Detecting a whiff of faerie magic around “Rinka Tinka’s Roving Wonder Show,” they soon become entangled in the aerial circus’s complicated—and deadly—mysteries. While the glamorous milieu is sadly underutilized and, despite a plethora of airships, the mechanical marvels are less than dazzling, Horwitz deftly grounds and expands her fictional world, diving deep into political intrigues among various faerie factions. The protagonists also gain depth and maturity: Carmer remains clever, kind, and conscientious, but he sheds some of his diffident awkwardness; Grit, although still rude and self-centered, begins to accept her responsibilities. Their antagonists are ruthless but, true to their own code, are hardly cartoon villains. The remaining characters are charming, if paper-thin; with the exception of Bell’s “ebony skin” they apparently default to white—and if the utter absence of observable racial bigotry in this alternate turn-of-the-century Virginia feels unlikely, it’s not much odder than a 13-year-old boy motoring about the country (seemingly) alone, conducting professional technical inquiries, without comment.

Improbabilities notwithstanding, anyone who enjoyed the first book will be delighted by this suspenseful series entry. (Fantasy. 10-14)

THE WINGSNATCHERS
by Sarah Jean Horwitz