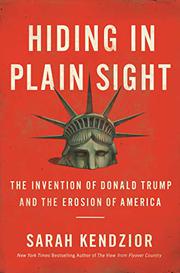 The Invention of Donald Trump and the Erosion of America
by Sarah Kendzior
BUY NOW FROM
AMAZON
BARNES & NOBLE
LOCAL BOOKSELLER
GET WEEKLY BOOK RECOMMENDATIONS:

A scathing indictment of Donald Trump and the “wider movement of white supremacists and international kleptocrats seeking to dismantle Western democracy.”

In a follow-up to The View From Flyover Country (2018), St. Louis–based Globe and Mail op-ed columnist Kendzior elaborates on her argument that a decadeslong “erosion of American institutions and social trust” paved the way for the present “autocracy, wrapped in a tabloid veneer.” Although she reiterates points made by David Cay Johnston and others, Kendzior offers fresh views based on her experiences living in the declining economy of the Midwest and on observations as an academic researcher studying dictatorships in the former Soviet Union. In St. Louis, she watched the growth of increasingly harsh social and economic conditions from 2008 onward, foreshadowing national decline; in Uzbekistan, she witnessed the rise of dictator Islam Karimov, who sought to “make Uzbekistan great again,” called independent media “the enemy of the people,” persecuted marginalized groups, and abused executive power to enhance his personal wealth. Given those perspectives, the author has been tireless in sounding her dark alarm over the Trump presidency, in both her writing and public appearances. She explores White House nepotism, including the rise of the “rich, connected and unqualified”; Trump’s “stripping America down for parts and selling those parts to the highest bidder”; and his close relationship to political operative Roy Cohn, who, since the early 1970s, taught Trump to “counterattack, lie, threaten, sue, and never back down.” For decades, Trump “relied on oligarchs and mobsters from the former USSR for support” after being blacklisted by Wall Street following his 1990s bankruptcies. Kendzior also blames the “timid and plodding” Mueller investigation as well as the mainstream news media, “an industry for elites” reluctant to upset social peers.

A passionate call for immediate action against the “transnational crime syndicate” that has supplanted the U.S.