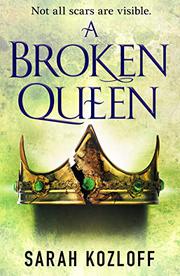 Cerúlia recovers from her wounds and decides it’s finally time to take back her throne in Kozloff’s (The Queen of Raiders, 2020, etc.) penultimate Nine Realms novel.

Badly burned and laid up in a Healing Center, Cerúlia is losing faith in herself. She misses the various friends she’s made along her journey, misses her home, and resents her limitations as she heals from injuries sustained in the previous novel. In the past, her magical “Talent” for talking to animals has helped her make friends with local creatures, but she’s worried that something has happened to her ability and fears using it. As she slowly recuperates and learns from the fellow residents in the healing center, Cerúlia comes to understand that she must face her responsibility to her people and find a way to become the Queen of Weirandale. To that end, she returns home to her nation’s capital, Cascada, only to discover that her long-lost foster sister, Percia, is about to marry the kindly son of the maniacal and power-hungry Regent Matwyck, the very person keeping Cerúlia from her throne. Reunited with her beloved foster family, Cerúlia decides it is time to stop hiding under aliases and disguises. But with no army to support her, how is she supposed to save herself from Matwyck’s clutches? And now that she’s seen more of the world and understands the lives of regular people, does she even believe in the idea of monarchy at all? Kozloff finally brings the action back to Weirandale in a compelling setup to the last novel in her series. Like Book 2, this one struggles a bit with standing on its own, but Kozloff uses these pages to make Cerúlia a more complex and compelling character. Threads following other characters from other nations are easy to follow and add dimension to the world, but as of now they still feel a bit too detached from the main plotline.

THE QUEEN OF RAIDERS
by Sarah Kozloff
Sci-Fi

A QUEEN IN HIDING
by Sarah Kozloff
Newsletter sign-up